SASMAP’s purpose was to develop new technologies and best practices in order to locate, assess and manage Europe’s underwater cultural heritage in a more effective way than is possible today. SASMAP will take holistic- and process- based approaches to investigate underwater environments and the archaeological sites contained therein.

SASMAP benefited the management of underwater cultural heritage in Europe and in the rest of the world by providing valuable tools to plan the preservation of offshore archaeological sites and their contents in accordance with both the Treaty of Valletta (1992) and research driven investigations. The need for SASMAP was based on the results from previous and current EU initiatives, the networks resulting from these projects and on-going research at the consortium’s institutions. Within SASMAP a holistic approach was taken to locating, assessing, monitoring, and safeguarding underwater cultural heritage. This involved developing and utilising tools and technologies to allow “down-scaling” from the large scale regional level, moving on to the local site level and finally to the individual components of a site. Results obtained from the down-scaling approach at the proposed study areas showed the effectiveness of such an approach for locating and detailed mapping of archaeological sites and their preservation potential. The end results of this approach was used to develop a plan for assessing archaeological sites in European waters. From a management point of view this is an up-scaling approach to planning (bottom up). All information and experiences obtained during the course of the project were utilised to enhance and develop existing legislation and best practice for mapping and preserving Europe’s underwater and coastal heritage.

Surveying and monitoring archaeological sites is a prerequisite for the assessment of physical and geochemical stability. Remote sensing techniques are one of the most cost effective tools for regional scanning of the seabed surface sediments and morphology by full or semi-automated classification based on reflectivity index. On underwater sites, side scan sonar, subbottom profilers, magnetometers, and single and multibeam echosounders have been used to locate and map archaeological sites both on and within the seabed for many years. One of the significant strengths of the SASMAP project was building on existing technologies. 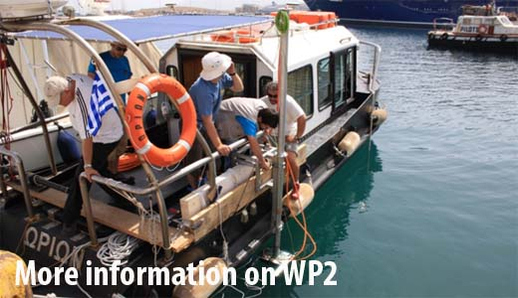